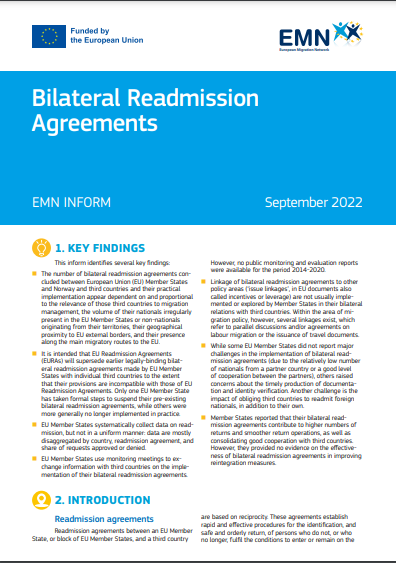 What bilateral readmission agreements exist between EU Member States, Norway and third countries to facilitate the return of migrants staying irregularly on the EU territory? This EMN inform aims to map these agreements and understand how they work.

The inform, specifically focuses on the bilateral readmission agreements negotiated, signed, or entered into force in the period 2014-2020. The inform is accompanied by a detailed the inventory which updates the inventory of professor Cassarino by mapping bilateral readmission agreements, implementing protocols and memorandum of understanding which are negotiated, signed or entered into force between 2014-2021.

Readmission agreements are formal instruments to facilitate cooperation between two (or more) countries involved in the readmission process of the nationals of one country into the territory of the other. They usually include a direct commitment by signatory States to accept requests for the re-entry of individuals (nationals, but in most cases also third-country nationals or stateless persons), and set out the specifics of the collaboration, such as time limits and the issuing of travel documents. In addition to bilateral readmission agreements, a number of EU-level Readmission Agreements (EURAs) have been negotiated with third countries, in line with the increasing acquisition of competence by the EU in this policy field.