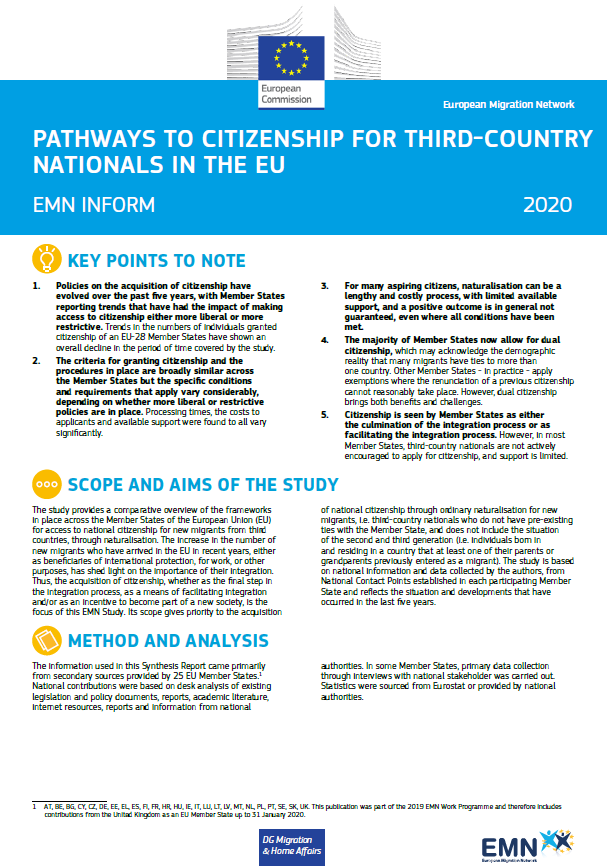 This EMN Inform presents the main findings of the European Migration Network (EMN) study ‘Pathways to citizenship for third-country nationals in the EU’.

The study provides a comparative overview of the frameworks in place across the Member States of the European Union (EU) for access to national citizenship for new migrants from third countries, through naturalisation.

The increase in the number of new migrants who have arrived in the EU in recent years, either as beneficiaries of international protection, for work, or other purposes, has shed light on the importance of their integration. Thus, the acquisition of citizenship, whether as the final step in the integration process, as a means of facilitating integration and/or as an incentive to become part of a new society, is the focus of this EMN Study.

The scope of the study gives priority to the acquisition  of national citizenship through ordinary naturalisation for new migrants, i.e. third-country nationals who do not have pre-existing ties with the Member State, and does not include the situation of the second and third generation (i.e. individuals born in and residing in a country that at least one of their parents or grandparents previously entered as a migrant).

The study is based on national information and data collected by the authors, from National Contact Points established in each participating Member State and reflects the situation and developments that have occurred in the last five years.

Pathways to citizenship for third-country nationals in the EU: EMN Synthesis Report