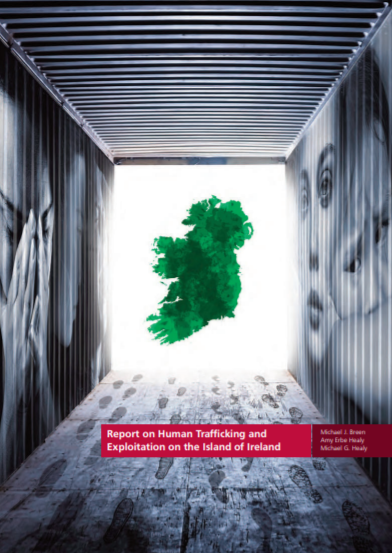 The Human Trafficking & Exploitation Project on the Island of Ireland (HTEPII) is the culmination of a cooperative project involving several collaborators. This unique mixed-methods research project brings together senior academics at Mary Immaculate College with senior personnel from An Garda Sióchána, the Police Service of Northern Ireland, the Irish Department of Justice & Equality, and the Department of Justice Northern Ireland to review and re-assess the scale and scope of human trafficking in Ireland.

Conceptually, the project is located within the Santa Marta North Atlantic Maritime Project, an inclusive partnership of the police, clergy, state and civil society in Ireland, England, Scotland, Spain and Portugal. In particular, this report is concerned with reaching an informed consensus on human trafficking data, especially the ‘dark figure’ of unregistered victims of human trafficking that is not formally known to the Police / Justice systems north or south on the island of Ireland.

Specifically, this report shines a light on that dark figure, illustrating that there are substantially more ‘invisible’ victims in Ireland than are officially known to the authorities. Concomitantly, it contributes to substantiation of this issue within the broader theme of social exclusion and poverty, as well as equality, diversity, inclusion and interculturalism that are at the heart of creating a more just, equitable and fair Irish society for the coming decades.

The report examines key questions such as: why are the victims of this crime invisible? How is this possible ‘in plain sight’? What data exist in the ‘official’ record? What additional data can be added to improve understanding of the scale and scope of human trafficking in Ireland? What facilities are available currently, and what is needed to enable victims to seek support and help? Whose awareness is critical? Whose awareness is insufficient? How can this be addressed and rectified?

These questions are tackled both through the lens of official records such as the two National Referral Mechanisms and through other filters, in particular the experience of support organisations / NGOs that provide a variety of ‘unofficial’ services to trafficking victims who are not presenting formally to the Justice / Policing authorities. This report demonstrates that the work of victim support organisations and NGOs can help with understanding the barriers that prevent victims from engaging with the statutory authorities, as well as highlighting the inadequacies in State support for those who have been trafficked.