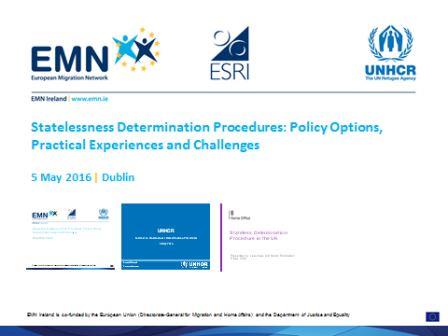 Joint seminar hosted by EMN Ireland, within the Economic and Social Research Institute, and UNHCR Ireland.

This EMN Ireland/UNHCR Ireland event presented information on the experience of stateless people in Ireland, along with two case study examples of dedicated determination procedures adopted by the UK and France. Speakers considered both the challenges and advantages in establishing a statelessness determination procedure. The panel discussion provided an opportunity to consider the form that such a procedure might take in Ireland.

In 2014, UNHCR marked the 50th anniversary of the 1961 Convention on the Reduction of Statelessness with the launch of a 10 year campaign to end statelessness. Working to achieve greater political commitment to eradicate statelessness, the campaign seeks to resolve and prevent situations where people are not considered a national by any state.

As people without a nationality, stateless people may face many obstacles in their day to day lives. Opening bank accounts, signing employment contracts or even getting married can prove difficult when they cannot secure proof of their nationality or identity. The establishment of a statelessness determination procedure enables States to best assist stateless people overcome these challenges and enjoy their basic human rights.

In December 2015, the Council of the European Union’s Conclusions on Statelessness invited the European Commission to launch exchanges of good practices among Member States, using the European Migration Network as a platform to do so. While Ireland has not yet established a statelessness determination procedure, France has one of the longest established procedures in Europe and the UK introduced a new procedure three years ago. French and UK officials accordingly agreed to come to Ireland to share their experiences in establishing and operating such procedures in their respective countries.

EMN Ireland is co-funded by the European Union (Directorate-General for Home Affairs) and the Department of Justice and Equality.