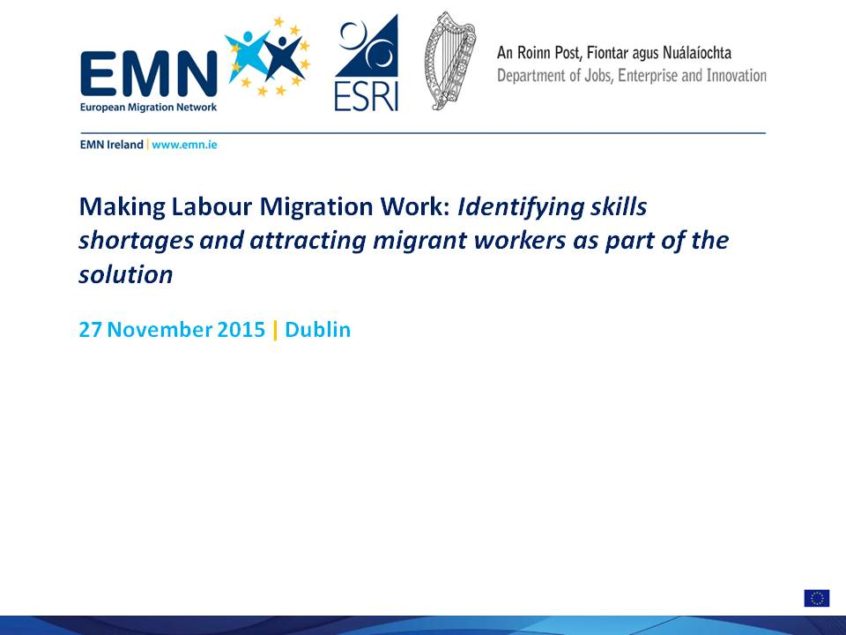 This joint conference hosted by EMN Ireland, within the Economic and Social Research Institute (ESRI), and the Department of Jobs, Enterprise and Innovation, took place in on Friday 27 November 2015 from 08:45 – 12:35 at the Alexander Hotel, 41-47 Fenian St, Dublin 2.

This half-day conference brought together Irish and international speakers to provide a comparative overview of approaches to identifying labour shortages, and related migration policy formulation. Recent policy developments in Ireland and Europe indicate that migration is one, increasingly well established, part of the response to identified shortages. The conference provided insights into new measures used to compete for migrant workers needed to fill identified skills and labour gaps.

New Approaches to labour migration in the OECD

Dr Dumont’s presentation looks at the recent development and evidence regarding labour migration in Europe and shows that the old concepts that have funded the European model to manage labour migration (temporary vs. permanent migration, demand versus supply driven systems, low versus high skilled) are increasingly outdated. It calls for a more flexible and broader approach to the role of migration in responding to skills need, that would also imply to make a better use of available migrants’ skills.

In June 2015 the Home Secretary commissioned the Migration Advisory Committee to undertake a review of the UK’s Tier 2 routes for skilled migrant workers. This presentation summarises the MAC’s early work on Tier 2 Salary Thresholds, published in a report in July 2015, and outlines issues that may be considered in the MAC’s wider Tier 2 review, due to be published in early 2016.

‘Identification of skills shortages in Ireland: institutions, data and methods’

The examination of balances between demand and supply of labour at occupational level has been carried out in Ireland since the early 2000s. To this end, Ireland has set up a network of relevant organisations, data collection processes, the National Skills Database and an analytics unit for monitoring the labour market at occupational level in order to identify skill shortages. The identification of shortages is based on a wide range of data sets and labour market indicators, including employment trends, vacancies, job announcements, graduate output, occupational forecasts and labour market transitions. Information on skills shortages has been used to manage migration, as well as to advise policy formulation in other areas including education and training, labour market activation, career guidance etc.

‘The return to growth and the role of economic migration’

Economic migration policy has a key role to play in differentiating Ireland’s competitive offering to prospective migrant talent from outside the EEA, not just in the context of economic recovery but also, for example, in ensuring the State’s healthcare system remains adequately resourced. Ireland’s economic migration policy has traditionally been pro-cyclical.  In recent years, it has become firmly oriented towards the attraction of critical skills across sectors where there are clear shortages of skills – shortages that are often global in nature.

The Irish employment permits system is geared towards tightly matching key skills demands and attracting those skills from outside the EEA, whilst ensuring no disruptive effect on the domestic labour market, nor creating barriers to the upskilling of the domestic population.  Fiona Flood’s presentation will examine the context in which policy is developing and outline innovations in the management of economic migration that aim to maintain and enhance Ireland’s capacity to attract international talent.

‘Ireland as a Global Centre for Excellence’

Ireland is increasingly known as a global centre of excellence for US companies and as a great place to develop a career.  Immigration policy has played an important role in meeting the skills needs of industry in Ireland’s ongoing economic recovery.  Room for improvement remains and the immigration system must continue to be open to reform.

Professor Martín’s presentation will provide some statistical evidence showing that continental Europe is losing out in the competition for global talent, in terms of the level of skills and specialisation of the migrants it attracts. Europe is less attractive for skilled migrants worldwide than the United States, Canada or even the Gulf countries. The presentation will then review the causes (such as a lower wage skills premium, national languages, fragmentation of the European labour market and the failure of the EU to ensure free movement for third country nationals) and implications of this situation. Finally, current migration policies to attract highly-skilled migrants at both EU and national levels will be discussed, as well as the ongoing review of the EU migration policy, in view of projected labour and skills needs.