The day after publishing the annual Population and Migration Estimates showing the highest inward migration numbers in fifteen years (more on these new statistics to come from us in the near future), yesterday the Central Statistics Office released a smaller, less widely discussed dataset that also sheds some light on the nature of migration in Ireland in 2022: the Labour Force Survey for Quarter 2 of 2022. A look at this latter release provides interesting insights into how migrant populations fit into the Irish labour force today.

Of these migrants in the labour force, about 15% are UK citizens, 53% EU citizens from outside Ireland, and 32% from elsewhere in the world, as illustrated in the chart below. 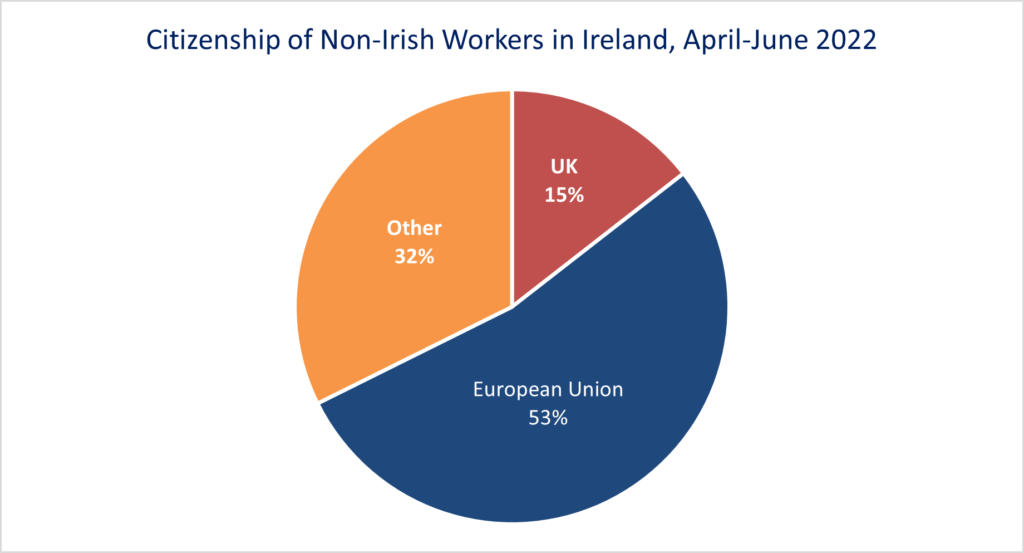 The DETE data accounts for 24,116 employment permits issued to third-country nationals between January and July 2022; this includes both first-time permits and renewals. The top five countries of origin among those issued with employment permits (new or renewed) during that period were India (accounting for 35.7% of all permits), Brazil (12.6%), Pakistan (4.8%), the Philippines (4.7%), and China (3.6%). The largest number of permits were issued within the Information and Communication sector (27.2% of all permits), followed by Health and Social Work (23.5%) and Agriculture, Forestry, and Fishing (15.7%). Co. Dublin accounted for the most permits by far, with 49% issued there. The second and third largest numbers of permits were issued in Co. Cork (7.2%) and Co. Kildare (6.8%).