Last Friday, 19 August, the Central Statistics Office released the fifth instalment in the series ‘Arrivals from Ukraine in Ireland’. The latest set of statistics includes individuals issued with PPS numbers under the Temporary Protection Directive as of 7 August 2022. Since the previous instalment, which covered the period up to 10 July 2022, the total number of PPS numbers issued has climbed to just under 48,000. The number of weekly arrivals has slowed a bit since then, with the week ending 7 August recording 882 total arrivals – the fewest per week in the entire period covered by the CSO data. 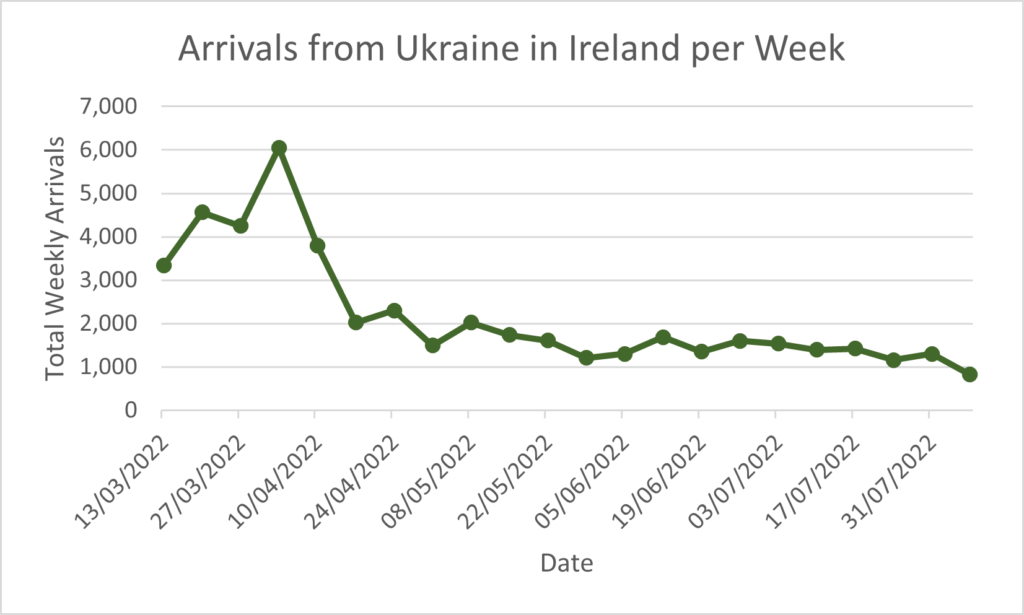 The CSO data demonstrates that the majority of arrivals from Ukraine in Ireland hold Ukrainian nationality, but a small percentage are people with other nationalities who are also entitled to seek protection under the Temporary Protection Directive. By the week ending 7 August, individuals with Ukrainian nationality represented about 98% of all PPS numbers issued. This is similar to the EU-wide average: the European Union Agency for Asylum (EUAA) reports that in the same time period, at least 95% of all registrations for temporary protection in the EU came from Ukrainian nationals. (The EUAA notes that citizenship was not reported for about 3%, so the figure could be higher.)

As in the previous series, this instalment tracks employment status and barriers to work. The CSO reports a total of 6,546 temporary protection beneficiaries with earnings from employment in July 2022, with average weekly employment earnings of €372. Those with employment earnings represent approximately 13.6% of all arrivals, or about 21% of all adults aged 20 and up. This is a slight increase since the data reported in Series 4, where approximately 20% of adult temporary protection beneficiaries reported employment earnings (see the EMN Ireland writeup here). As in the previous report, around two-thirds (67%) of adults attending Intreo events named English language proficiency as a barrier to finding employment, while about 5% named access to childcare and/or transport as a barrier.