Saturday, 30 July, marked World Day Against Trafficking in Persons. In observance of this international day, we are publishing a two-part post on human trafficking in Ireland. Part 1 places Irish data on trafficking within a global perspective, comparing Irish statistics (compiled from a variety of sources, including a recent EMN Ireland study), with international ones, as presented in the most recent Global Report on Trafficking in Persons from the UN Office on Drugs and Crime (UNODC), published in 2021.

In Ireland between 2015 and 2020, 356 people were identified by An Garda Síochána as suspected victims of human trafficking. The lowest number of annual identifications, 38, was reported in 2020; while lower than in previous years, several authors have noted the COVID-19 pandemic may have contributed to a decrease in identification of suspected victims. Of those 356, a slight majority (59%) were non-EEA nationals. This is in keeping with European and international trends: in every global region except for North America, migrants account for at least 50% of detected victims of trafficking. Migration status – and in particular the threat of being exposed as an irregular migrant – is one of the many factors of vulnerability which traffickers can use against their victims.  Indeed, the UNODC found that immigration status was a pre-existing factor in 10% of the court cases studied for its report. 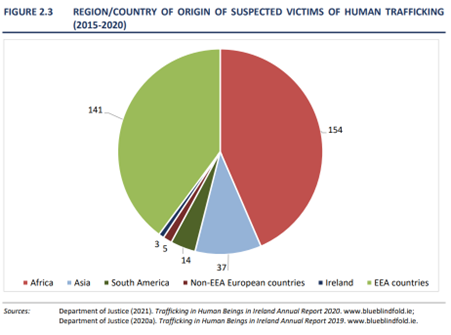 In Ireland, approximately 40% of victims of trafficking come to Ireland from other EEA countries, 43% from Africa, and 10% from Asia. Irish nationals comprise only 0.8% of identified trafficking victims, as depicted in the graph above. While the data from UNODC relies on different regional specifications, comparisons are still useful. Within the Western and Southern Europe region in 2018, about 54% of identified victims of trafficking came from either that same region or from Central and South-Eastern Europe, while 19% came from West or East Africa, and 14% from Asia and the Pacific. As the Global Report on Trafficking in Persons shows, however, the proportion of victims from each global region can vary from year to year. The largest discrepancy in comparing these two sets of statistics is the significantly higher proportion of victims in Ireland who are nationals of African countries (almost double the number for the larger Western and Southern Europe region).

It is worth noting that these official statistics include only those individuals who have been identified as victims of human trafficking. It is incredibly difficult to estimate just how many more victims are present in Ireland, Europe, or the world, given both the clandestine nature of trafficking and the many barriers that exist to victims being identified or identifying themselves to national authorities. By engaging with a variety of organizations who work with trafficking victims in Ireland, the HTEPII project reported numbers of ‘possible victims’ and ‘probable victims’ from 2014 to 2019. In addition to 346 ‘officially recognised victims’ identified during that period, that study’s authors noted 109 probable victims and 23 possible victims. These findings demonstrate the significant numbers of trafficking victims who may not be accounted for in official statistics.

Department Of Justice press release: Ireland upgraded in the Trafficking in Persons Report